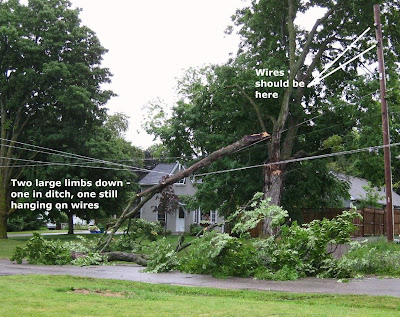 Yesterday morning dawned cooler and very, very wet. It had rained most of the night and at 8:50 a.m. it was still coming down. I had grand plans to finish any computer work early and then spend most of the day in my studio. Didn't happen.

Just before 9:00 a.m. there was a large bang and the power went out. My computer room is in the basement (no windows), the same as my studio room (no windows). Everything was pitch dark and with the bang (and shaking) I thought something had come down on the house. The house was fine, however one of the 100 year old maples across the street had lost half of it's "body" due to the rain (and obviously rot). 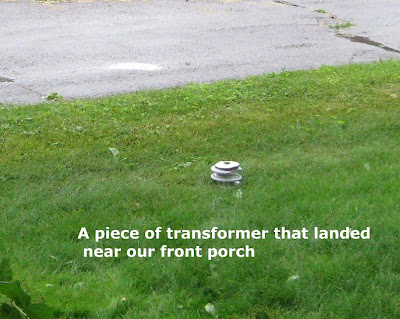 I'm not sure what the bang was, however part of one of the transformers on the pole ended up across the street and at the top of our front lawn. 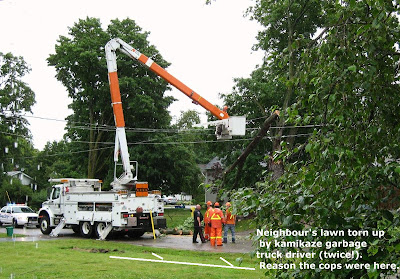 Yesterday was also garbage day and one of the garbage truck drivers decided rather than backing up and taking another street to get back on his collection route, he would careen around the hydro workers and use my neighbour's lawn as a speedway. He did the same thing on the way back down the street. Stupid.

Hydro was restored early afternoon, but for some reason, I had no internet until later last night. I did get some work done in my studio once the lights came back on though.

Today is gorgeous, sunny and hot, but not the unbearable, sweltering heat of last week, and NO humidity. Hope everyone is having a great day!

That dragonfly looks like a brooch... it's beautiful.... maybe he needed a drink of water..

how is your wrist coming along? Mine is better than it's been for months....I think the golfing is toughening it up. It still is crap to try to hold tiny things...so..I'm holding bigger things for now....shovels... golf clubs... drink glasses...hahahahha.... I ain't giving up my summer! I'll just be doing anyway..... I can try to get back to dolls and bears in the winter.

The loud pop was probably the Transformer blowing up. We have had this happen at our business twice now and once I was there and wow is it loud just like a bomb going off. Glad everyone is o.k. what a thing to have happen. Hope the rest of your wkend is uneventful?

WOW Sue!!! I'm so glad that you weren't hurt in that explosion or the tree or the run amok garbage man : )
sheshhh....

Have a great Sunday ~: )
Hugs ~Pattee

Hi Sue, I'm glad the tree didn't come down into your house. It still must have been bit scary for you, hearing those strange noises.
We are experiencing some very hot days here too. In Europe it's not common to have A/C, so I'm melting away and I eat more ice cream than I should, lol.
Have a lovely Sunday!
Hugs,
Julia

Hi dear Sue,
what a scarry thing, to happen just outside your house,
good nothing more happened.
Oh sweet here it is so hot ,-not to breathe---today equal hot-
I`m trying to go to a fleamarket,hopefully,I can find just a little something.Tonight we are making dinner for a deutch copple of friends,-and I`should really sit sewing all day long, but have to have some fun,too right? :)
Wishing you a lovely sunday, Sue.
Hugs, Dorthe

oh gosh, thats a little scary, glad your home and family are o.k

Wow Sue...so glad you were ok through all of this. How scary! :-O