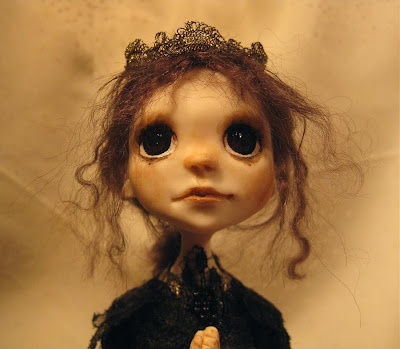 Sofia Isabela wanted to have hair the same as her older brother's, Prince Rafael.  She lopped off her long, thick braid and then had second thoughts.  She wondered if praying would help.
I was hoping to get this little gal done at the end of November, but unfortunately 'life' kind of got in the way.  Anyway, she is done now and I will put her up on Etsy tomorrow. 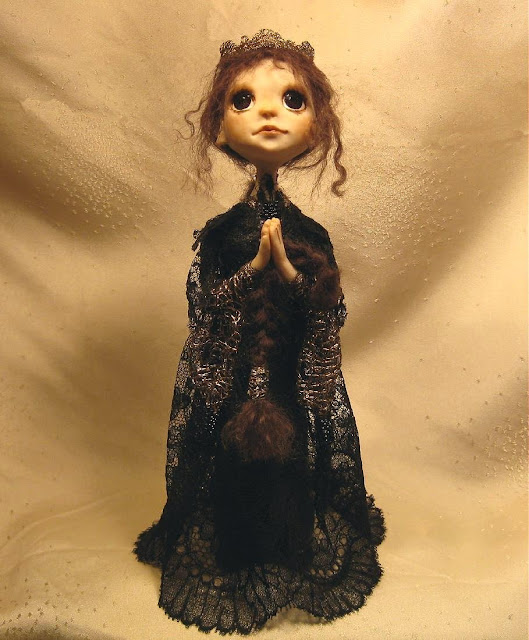 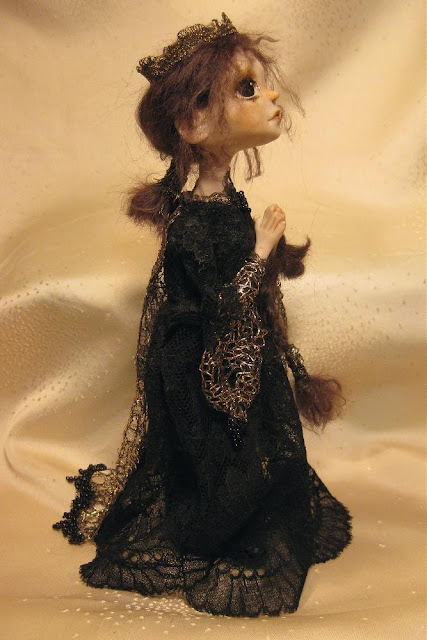 I now have less than two weeks to get several pieces done as gifts......yikes!  I feel like Halloween was just yesterday.

I have just started using NetworkedBlogs on Facebook...if anyone here wants to add me, that would be great!  I'm still trying to figure it out, but it seems like a great idea.

Sue I'm so sorry I havent been over for awhile. I can't believe how much I have missed. I'm so so so sorry to hear about your dad. As if you didn't already have enough pain in you life. Then to take Nicole in only to find out they didn't have the results! Why does life have to be this way sometimes?
Dispite everything you've been through you contine to create beautiful art! Shes Beautiful and Very symbolic at this difficult time in your life!
hugs Lynn

Sofia is just so sweet! Lord knows there have been so many times in my life when I made a fast decision that I regretted later! lol Love her, Sue!

ohh she is adorable...

I especially like her lacy dress.. VERY elegant, with great details and in the perfect scale!!!

She'll be a welcome addition to her new home, wherever that may be. You're awesome Sue, stay strong...

Ahhhh, just so precious! Look at her sweet face :) I love her black lacy dress as well.

Your beautiful doll reflects the way you have been feeling and thinking. She is praying for so many things, like you. I love her large innocent eyes. We should all try to retain a bit of that in our life if possible.

I think of you daily and wish you my very best~

oh, she's just delightful - such a peaceful and hopeful face - and so beautifully costumed.

So sweet and I love her face and gown to perfect. Love, Pearl

Oooooooh Sofia is just so cute! Maybe some glue would help Sofia!

I love the expression on her face and the layers of lace - beautiful!
Hugs,
Stephanie :)

She is just lovely Sue. Such a kind face she has.

Wow Sue... She is so reminisce of people that have lost their way... I want to cry seeing her.. I love her...

I don't know what Networkedblogs are but tomorrow I will look it up...

You are always in my thoughts and wishes....
Hugs and xoxo Pattee

I do not know how you do what you do..she's sooo beautiful! You have such an amazing talent..you should put all of your creations into a book so we could enjoy them always!!

She is wonderful! Her face is so precious! Love her. :)

She is precious Sue! I am always so happy to see your new dolls. The are so special just like you!
xoxo