I have written before about my tiny, 8 x 8 windowless cave/closet of creativity that I call my "studio".  "Studio" sounds so artsy, high-falutin', and almost posh doesn't it?  In reality, my little area is anything but!
If you are a messy worker (like me), it is impossible to keep tidy, and if you are the least bit claustrophobic (like me), it is also not very conducive to creative thoughts and actions. 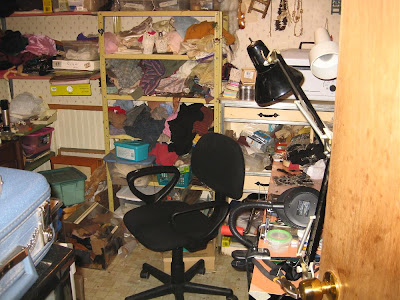 ....taken from the cave doorway this morning - the one advantage?  Everything is within reaching distance!
Now that both daughters have moved out, my plan is to take over one of the spare rooms (which at the moment is being used as a catchall/storage place) and convert it into a proper studio space.   I will have approx. 3x the room footage I have now AND I will have a nice big window!  Let there be light!
In order to empty proposed studio room so I can do the studio shift, I have to find room for all the stuff that is currently in it.  For the past couple of days, I have been clearing things out of another spare bedroom to make room for bins, etc. while still keeping a few fundamentally important pieces of furniture (bed, bookcase, dresser) in that room.  Deciding what should be trashed and donated is time consuming! LOL
This is what that room looks like this morning. 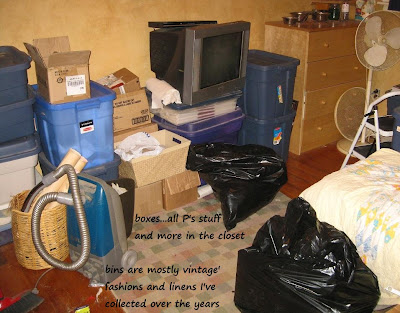 Boxes are Paul's stuff, bins are vintage clothing and linens from my days selling on Ebay and Etsy.  I still plan at some point getting back to my Etsy vintage shop,  so don't want to really get rid of too much of what is in the bins.  This room will obviously be a redo project at some time in the future ("some time" being the operative words LOL)
On Facebook this morning, I mentioned that I was getting ready to don my suit of armour to venture into my planned studio room to tackle the monstrous, chaotic mess that I created there yesterday.
I'm not kidding....... 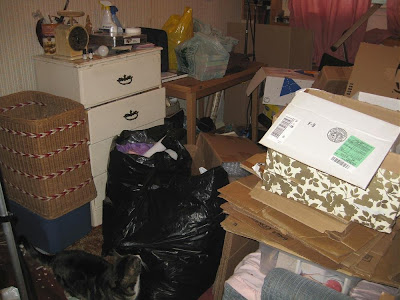 This shows just part of the room.   The cat, that is not usually allowed in this room and of course always wants in, sauntered in and promptly left in disgust.
A job that I thought I could tackle in a couple of days is now looking just a bit more daunting.  Previously, I thought the biggest part of my planned move would be lugging stuff from my downstairs cave up to the second floor.  That could turn out to be the easiest!
I also wanted to strip the wallpaper and paint, build some shelves and have everything looking just like it should be featured in "Where Women Create".  I think just getting things moved and organized will be all I will get done at first.
For now?  I'm going to venture into 'the cave' and play with some clay.
The dump run can wait until tomorrow.
♥
Posted by Sue at 3:33 PM

I'm sure you'll finish it sooner or later as for that women who create studio space...for me that would be a nice fantasy

The task almost seems overwhelming. Maybe the best way to tackle it is one corner at a time... but keep creating. It is the best medicine.

I know you will get it done. It takes motivation and I do believe you have that. I mean going from a 3x3 to 3x more...that would do it for me..LOL

Your studio space is as big as my studio space! What ends up happening is that I just take over the kitchen table for a few days at a time, until I'm finished!

Wishing you the best of luck with the clearing out!

Good luck with the rest of the clearing out. I know, it's so drab but a necessary evil. If you have garage, get those racks that hang from the ceiling and put some bins up there. :)

It takes time but you'll get it done in the end. I've moved my studio 3 times in the same house and oh is it a chore! I have faith in you!

I'm doing the same thing. I need to paint the other room, and re-do the flooring after two teen boys have lived in there. I cannot believe how many art supplies I have! I've decided to just chip away at it. Good luck - and don't forget to play! xox!

Oh my, a daunting task indeed...and I say that because I have an extra room that has now collected so much there is no room left unless we go up...and my studio..an art bomb has gone off and I'm not brave enough to face it yet...
I am wishing you speedy success..truly..
xo

Not an easy task, trying to work 3 rooms at a time? whoa but give it as much time as you have to. I think the biggest key is shelves! so everything is where you can see it. Clear boxes are the best and label them. Your on your way! Hugs, Pearl

Your cave looks like my posh studio.
I am not a tidy creator either..lol

It will be nice for you to a studio.
Wished i lived closer, i'd help you because I know what hard work it is clearing out a room.

It is great to have more space to work! And if you have more light, will be just perfect. Come on Sue.. you can do it! Sure it will take less time than what you think, and at the end you will be rewarded with your fantastic studio to work in.

My disaster area comes and goes..... depending if I am creating or not. If I am going to finally get back to doing anything...I need to make a space to work.... if not...well, it becomes my junk room. And...yes...I am spoiled enough to actually have a room...but, the bigger the space...the more junk I seem to collect.

I don't make resolutions...because I never keep them...but, my "new idea", for this year, ... as I am calling it...is to purge the stuff I am not using. Yes..I finally decided on what I will be doing and what I won't be bothering with....so... time to jettison the rest of the goodies. Maybe a giveaway on my blog? Packets of great stuff for somebody who will be trying whatever it is .. like card making. I wanted to do that...but, just never got around to it...so have lots of pretty papers.... also... some other endeavours..but, never will do them in a thousand years.... sigh.... okay... back to cleaning toilets first, and then...on to what has been my 'non' creative area...for some months now. Time to get back to some fun soon..... best of luck to us both!!

I don't think I am as brave as you are - my area for creating is an international disaster zone. I need to call in a team of people for help! LOL

Time to call in the forces. How many friends live close by and willing to lend a hand?
I want to do mine this summer,when I can pack everything outside and start over! LOL
hugs Lynn

I am now a new follower just because you shared the pictures of your room. Now I don't feel so chaotically alone in my disorganisation!