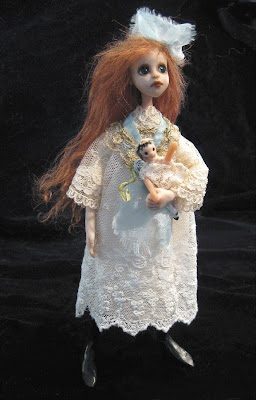 Amelie arrived at Castle Keep from France, excited to see her cousin Ceci. She had not seen her in ages and the picture she had of her in her memory was getting dim and distorted. 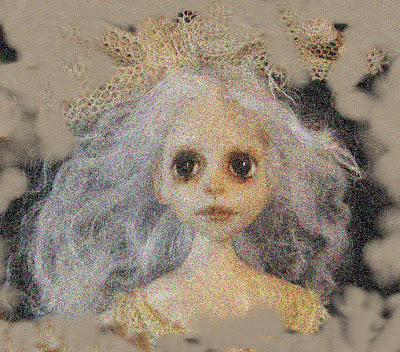 She couldn't find Ceci anywhere and decided to venture up to the attic, where she had been told never to go. Did Amelie find Ceci? We will never know as she too became a Ghost Child of the Attic. 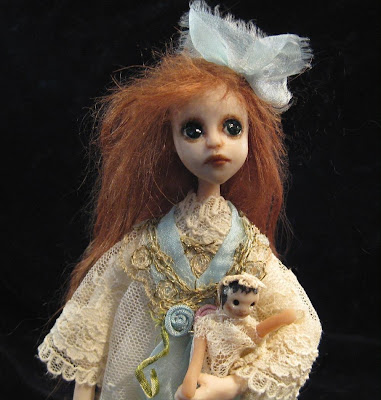 (there is a chance to rescue Amelie, she will be in my Etsy shop later this weekend)

She is just adorable!!! I love the story!!!! I am still trying to make my way through the long list of the gypsy caravan. I think I am going to go and check out the ADO. I see you are a member.

Hi Kim...yes, definitely check out ADO! It would be great to have you as a member.

Thanks for your comments

I love your faces on your dolls, they are so elfin, just wonderful work
Karey

Dare I go to the attic to see what's become of them? I just want a peek. ;)

What a beauty Sue! Gah, still saving those pennies! She is just lovely!

Today's verification: beali. Sounds like some foreign dish to me, what do you think? :)

Kerin, ditto to you *smiles*...and if I were you, I would stay away from that attic!

Zan, thank you my friend! Beali? Definitely a South Asian dish of some kind!

She is soooo sweet Sue. at least dhe found Cici:)

What a treat first thing in the morning! She's so beautiful! And I LOVE the story.

Sue,
I love you figures, they are wonderfully crafted and spirited. enjoy, julie

Oh Sue, she is just beautiful and you ARE!
Cheers!

nice to meet you...I am from Ontario too!!!
thanks for popping by to say hello!!

She is so beautiful Sue! I love her.

Your work is fantastic. I'm putting you in my blog roll, if that's ok. I'll be back to visit often.
:o)
Amy

Thanks for visiting my blog earlier, I'm so glad you did because Amelie is just heart meltingly beautiful!

I will certainly visit again to keep up to date with your work ^-^!

Oh, I love your creations!!! I like the big eyes. They are so cute.

Many greetings from Lotti