I am a Failure 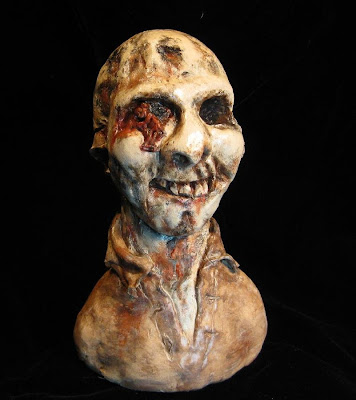 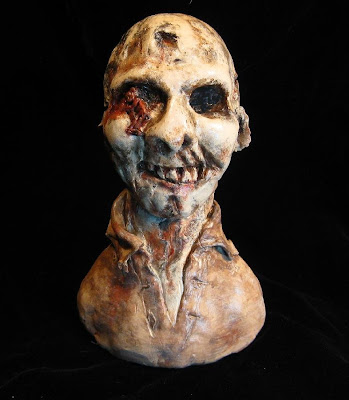 Yep, I'm a failure....at doing creepy. Over the years I have tried to create creepy, gory, gruesome in answer to that small corner in me that sometimes craves to touch on the dark side.

I can't do it. Everything (which hasn't been alot) that I have tried to 'do dark' ends up with a definite lighter side. The head
above is an order for a zombie bust. I was given a picture to base
it on, a zombie with a definite evil leer. Somehow my tools/brain/hands came up with evil zombie's Mr. Congeniality
cousin.

I even noticed that the maggots in his one eye look like a small
sleeping child hugging something. 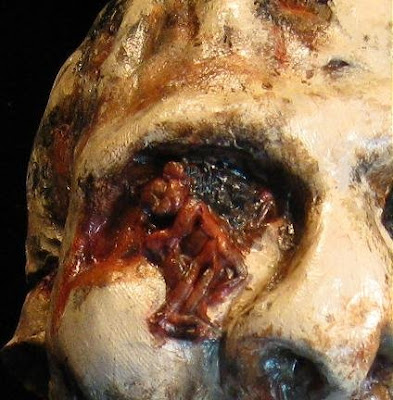 The good thing is that the gal who ordered this is happy with it and said she like that it had 'character'. A zombie with character - who'd a thunk it!
Posted by Sue at 11:59 PM

I don't know...that's pretty creepy to me!

You did a good job! It does look creepy, but I do see the little child that that you mention are maggots. I know ugly is all the rage and I have times of trying to create it. I appreciate all of the talent that goes into it's creation though. I can't really think of any art form I do not like. The dark has charm! Good job!

For what is worth... to me, he looks veeeeery creepy!!!!!
But I have to say that the maggots that you "sbliminally" arranged into resembling a child sleeping with a little dolly of some sort.. just blows my mind :)))) LOVE it!!!!!

Awww Sue, he is congenial! I love your work, so anything you do is fantastic in my eyes! I have this same problem with doing "serious" pieces. Have this burning desire to do something meaningful, but it always takes a turn to the more jovial side! Thanks for sharing your Mr. Good Zombie

He's just so creepy cool! I like your dark side!

Well, Sue, I'd have to disagree! He gives me the heebies, for sure! Actually, I'm like you--I think I can do "classically dark" (Gothic) but not the gory stuff like a zombie. But you did a great job, I don't think I could've done this at all!

Ummmm, he's creepy all right. I think you did a fantastic job!

I think that is very creepy. I know what you mean though. I have a fascination with the dark side and I end up with happy goth chic! LOL Yours is very gruesome!

Looks very creepy to me, how can you think it isn't, artists we are all so hard on ourselves.
I can't do scarey or creepy, ever! I always thought that a person who does creepy must have some demons hidden somewhere, hope that isn't true.
Karey

I know I couldn't sleep with this in the room, lol! so I think you succeeded in creating something 'creepy' :-D

This is great! My initial reaction was creepola! I thought ewww maggots, then (before reading the article) I saw a human form in the maggot. It looks like you've created deep meaningful creepy ~ way to go!

hee, the formation of the maggot child was totally accidental and I didn't see it until I took the pictures. I suppose on his own, this
guy does look creepy, but when compared to the reference photo, he is
almost jovial looking. LOL

OMG Sue... He's wonderful! He looks creepy to me. That grin is creepy and to think a maggot could be a sleeping child...is really creepy~ your a success!

Yes..I do see a Happy zombie underneath that toothyface! I think he's awsome! Love the maggot child it's so great when little things like that happen! who ever would have thought to actually make a maggot child! Brillent!
happy hauntings, Gail

I don't think it's a failure at all...it creeped me out! Mission accomplished!
and with that, I tag you ;)
oh yes, i am tagging you.
Here are the rules:
* Link to the person who tagged you
* Post the rules on your blog
* Write 7 random things about yourself
* Tag 7 people at the end of your post and link to them
* Let each person know they've been tagged

Sue, you did do it and it's amazing! I think you should do more of these! Come over to the darkside...the whimsical dark! LOL
Love it!
Cheers!

wow. awesome zombie. this looked liked a fun project --great job Sue -- creepy has been in my mind lately and maybe you inspired me to start one.

Whats wrong with that Sue? Its amazing coolisiousness! Dark with charm! I love the juicy textures you got in the maggot child. There are all shades and flavors of dark. Own yours gurl!

I insist you make more so there:P

That's a good thing....maybe you just don't have that in you! This is creepy with a sense of humor too! You are an amazing talent! The nose does it for me....the creepy part!! lol

It is definitely not a failure. I love it! :)

Hahaha He is super! much more fun then a creepy zombie! A zombie with layers. And you are not a failure!!!!!!!!!!!

LOL Sue you crack me up!! when I first saw this I thought it must be a mistake, it couldn't be a Bartons Original. I think you did a fantastic job and think he is super creepy!!

As someone who regularly has nightmares about zombies, I feel somewhat reassured so I'm happy about it! He does look kind of cool!

LOL..thank you everyone for your comments on this darkside attempt of mine. I really enjoyed doing a bust and then the painting part of it. I think I may do some more. Not sure if I will do any more zombies but
I think they will be 'darker' than
'sweet'

Hehee! Creepy, but in a nice sort of way :)
I think his maggot child looks like Mickey Mouse, smiling.