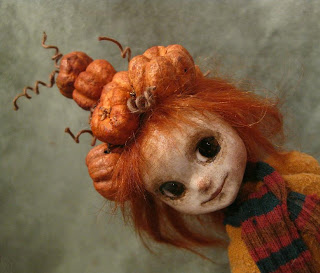 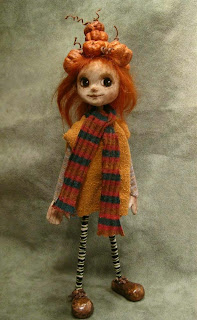 Keeping your daughter in my prayers.

Oh Sue the doll is gorgeous! The video had me all smiles. :)
I will definitely keep you and your daughter in my prayers.
Big Hugs,
Roxanne

Sue,
I'm thinking of you...my daughter has cancer and we have battled for 5 years. I'm so happy to say that we are winning..you and your daughter will too! I just feel it.

Pumpkin is gorgeous :)
The cat video was cute. I can relate.
Best wishes to your daughter

Oh Sue you are so definitely in my thoughts. I had stage 3 removed from my cervix a few years ago at only 26. While it wasn't cancer it certainly would have been in time. I will send my positive thoughts and hope that everything is okay and you have caught it in time.


As to the cat video. That made me laugh. He has captured a cats nature perfectly. We left a box last night all taped up ready to mail interstate on the floor. I got up this morning and the corner is missing and some tape has been pulled off haha (growls at kitty)

I nearly passed out when I read this post.. Somewhere during my long absence from reading all the blogs, I had missed the previous post about your daughter.
Sending positive thoughts and prayers to Nicole,You and your family.

Aw, Sue, I am sending all good thought and prayers to your Nicole. xoxo!! Pam

Oh gosh Sue, I think the hardest part is waiting and not knowing, You are both in my prayers!
much Love Lynn

OooOOo...lucky stateside person who gets the awesome *Pumpkin*, she's adorable....

Battles are overcome daily. I know you and the girls will be able to win this one too.

Hello Lovely Lady! Of course Pumpkin would be snatched up quickly! She is wonderful.

I know this seems scary but know that everyone is concerned for your family. We will all pray and send wonderful thoughts out. Just let us know how we can help you! HUGS!!!

Pumpkin is really beautiful and so perfect for the holiday! I smiled when I say the video, it's very cute!
Keeping you and your Nicole in my prayers.
Hugs, Evelyn

First and foremost I'm keeping your daughter in my prayers and heart.
I think I told you my niece had this and she's been living free for many years...

I can see how someone would snatch up Pumpkin!!! She's adorable!

And then thank you for that cute cat video... I have a cat usually have more than one... and it fits so perfectly with how cats behave! Thank you for that ... It's my first smile for the day~: )

Sweet Sue, I just love your darling pumpkin,- her face is so wonderfully made- dear.
Hugs,Dorthe

you and Nicole are still in my prayers. May you find the strength to stay strong, and have faith.
If she hasn't done so already, this may be a good time to change her diet to a healing diet (raw, organic) and to look into heavy vit D supplementation. This way she can increase her immune system, and help her body out.

Hi Sue,
I was hoping that Thursday would bring some answers for you. I'll continue to hope for the best. Happy Thanksgiving!

First off I will definitely keep you both in my thoughts and prayers. Starting right now!

And I'm in love again!!!! Pumpkin is so so sweet and the little pumpkins in her hair are just perfect. This is an amazing piece Sue. Bravo!!!

Hey Sue,
just want you to know that you and Nicole are in my thoughts and I hope for the best outcome.

of course your pumpkin girl sold so quick she is adorable.

I love how pumpkin turned out! I will keep your daughter in my thoughts and prayers. I believe that faith and a positive attitude play a big role in healing!

Your Daughter is always in my prayers sweet lady. Pumpkin is the cutest thing ever. Hugs, Pearl

HI Sue :)
Your Pumpkin Girl is so adorable... and I am praying for your daughter, I hope things are better soon
Thank you for commenting on my baby :)
ps. love the comic too
Blessings, Cat

Simon is one of my favorites..thanks for sharing!

What a lovely little doll.
Strong healing thoughts coming your way for your daughter.

I love Pumpkin and what you've done with her.
Happy belated Canada Day and thinking of you :)

Pumpkin is beyond adorable, I love her :)

I`m so sorry about your daughter. Cancer is such a horrible thing. I`m sending you all loads of warm and healing thougths *big hug*