Some of the Giftee Things I Made for Christmas

I have a lot of fun making small little figures and ornaments for gifts and thought I would share some of the pieces I made this December. 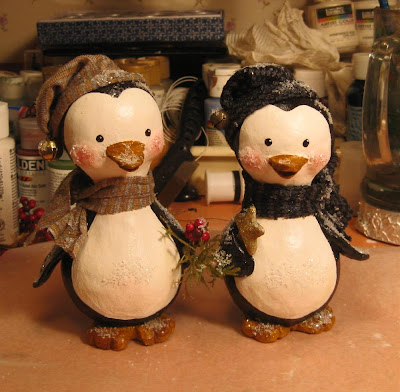 These two little guys were sculpted from paperclay over a lightbulb base for the body and a styrofoam ball for the head.  I may make some (and maybe some owls too) for my etsy shop next year.  They certainly were fun! 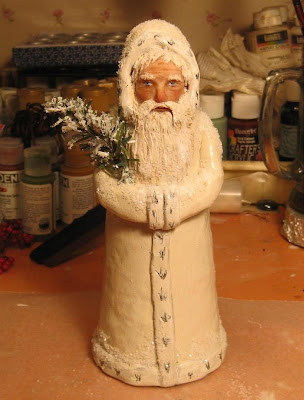 For this version of a belsnickle, I used an old paper mache yarn cone as the base and covered it in polymer clay - sculpted the face and arms and then painted and glittered.......fun!  Also hoping to make some variations of this for my Etsy shop next year. 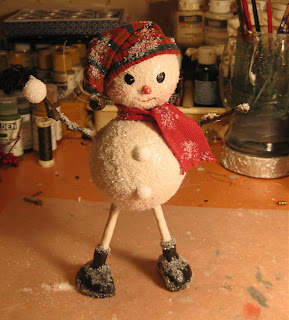 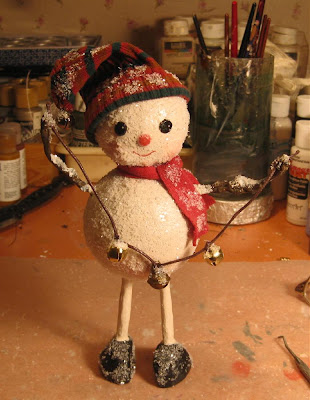 These two little guys have styrofoam balls as the base for their heads and bodies, dowels for their legs and chopped-in-half styrofoam balls for their feet.  Covered in paperclay, painted and glittered.  Their 'twig' arms are cut from some veiny stuff I purchased last year from Michaels and are actually wire coated to look like twigs. 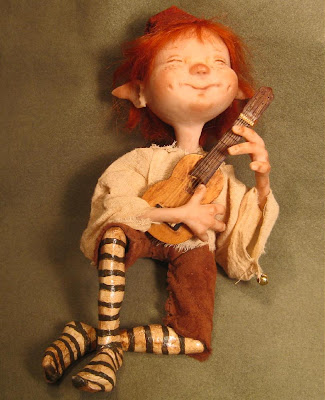 My little 'music man' was sculpted from polymer clay.  I love the work of Surya O'Shea and have used his enchanting illustrations as inspiration for two pieces that I've done - both of which have been for gifts.
♥
Posted by Sue at 4:37 PM

Sue that Santa is to die for! I mean all your work is great but girl that Santa and that lil elf are so Wonderful!
Hope the new year is rolling along good.

Oh my goodness! I love them all. I have to say though, the penguins are just too sweet for words.

You are so clever! I saw a peek of these on one of my skimpy FB visits so I'm glad you shared them here too. I should have you make me a grungy snowman next year...just a thought:) So glad you're creating again! xox

All your little characters are cute, but the "Music Man" stole my heart, Awesome, my friend!

Glad to see you jumping into the doll making again!! These are great, as usual! More please :) :)

I LOVE your little penguins. How sweet and adorable they are. I'm so glad that you are back! How I've missed you.
I hope 2012 proves to be a wonderful year for you and your family.

Sue come by my blog I have a message for you. Hugs, Pearl

They are all so adorable!! Love them!!

Ooh I love them! They are all so precious! Your little music man has the cutest expression. Wonderful work. Congrats on another post by the way! lol. I think we'll both be counting. :)

They are all so cute! I bet the folks on your Christmas list were very happy. :) I don't have a favorite. They are all really wonderful! xo Pam

Super adorable! I love looking at your stuff.

Your little music man is soooo cute. I love the expression on his face and oh those stockings!

These are AWESOME. What thoughtful and beautiful gifts! xo style, she wrote

Sue, so glad to see that you are "back"! These gifts are just wonderful. Will hope to see some Santas in your shop next year to add to my collection of Santas!!

Wow! These are great Sue! You've been busy and I haven't even been by to visit... I'm putting you on my bloglines now though...so I will know when you update....the reading list is so long and I hardly ever look at it. Bloglines works better for me it seems...