Been in a bit of a funk lately.  Can't put my finger on just what is sapping my energy so that I feel like this.. 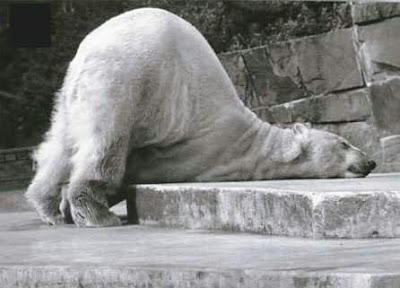 I have so much to do, but things seem overwhelming.
One would think that after being so focussed on Nicole for several months, and then being so relieved at her prognosis I would feel totally rejuvenated.  I did for several weeks, but then seemed to slip into this grey funk.  I have tried to self-analyze myself, and I realize that part of my problem is clutter.
I am feeling overwhelmed with clutter.  Clutter in the house, clutter with the computer, clutter in my body.  Okay the body part isn't really clutter, but fat.  Excess baggage that I have packed on over the last year or so.  I feel larger than Mr. Polar Bear above, which has led to much of my lack of energy.  Lack of energy has led to lack of exercise, and thus a vicious cycle of sluggishness ensues.
From past experience I know when I feel like this, exercise is a key to banishing the funk, so starting today, I am resuming regular exercise.  I have not been doing much sculpting due to my wrist (carpal tunnel) acting up again, but I have been doing a lot of surfing around on the internet.  My new plan  will mean not sitting on my butt at this computer so much and actually starting to MOVE. 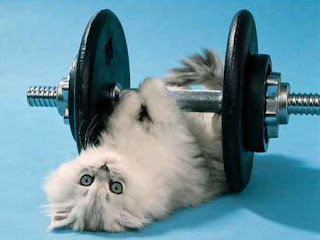 Usually I have grand ideas and start out too big, this time I am going to plan and pace myself so that I don't end up giving up.
Baby steps... 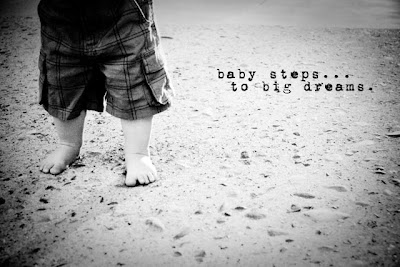 Bliss Boutique Photography
The house?  One drawer at a time.  Sort and purge is the plan.  My scheme here (body/house) may take several months, several years - but I know that I will feel so much better.
Time to start!!!
♥
Posted by Sue at 5:23 PM

Oh I tell ya..I could have written this myself! Seriously! And the photo of me? Where did you find that..I though I had hidden it..LOL

Really, your body and mind have gone through so much and even though we don't like to admit it, we need rest. We are not superwomen..well, we are..but even superwomen need rest. If you're like me (and in most ways I think you are..except I missed the talent part..Hmmmm)you handle the crisis well, then, BAM! hit a brick wall. You don;t even know what a toll this has taken on you. SO be kind, be gentle, and be loving to yourself, your body and your mind. I wish we lived closer so I could give you a big 'ol polar-bear hug. We WILL make it..and have fun along the way. And, it's NOT a race. we can go at our own pace. The housework will wait for us..every drawer done will be a milestone and every movement of our body a success!

Sue - the internet is not going to help your carpal tunnel one bit!

I can thoroughly sympathize with your not having enough energy. I have had low energy reserves since my teens. It can be extremely frustrating and debilitating. But if you are disciplined enough to stick with it, exercise may really help. Now, if only I would listen to my own good advice!

I wish you luck with your current momentum! One thing I find that makes exercise more fun is to just dance around. I set an "excercise" playlist on my iTunes: starts slow to warm up, some fast ones in the middle and then a medium one to warm down. It's great fun! Works as a warm up to an excercise or as the exercise itself!

sorry to hear your in a funk Sue. Yoga and meditation help me revitalise.Hope you find your cheer and zing soon.

I really like Fairy cardmakers comment, any time I put loud music on I start to dance! Do it while you clean out drawers just do one leap to the garbage can and back to drawer! Just get jiggy with it :)

Sue..so sorry for your funky state...that cluttered up feeling, I've been there. There are other dancers here, we a suggest the same thing..DANCE...since I've been trance dancing my energy, body, and thoughts have changed...I so recommend loud music and just dancing because it feels good...please try it...by candle light is best...
love and light...and more hugs...we all love you. xo

Sue, are we twins? Seriously! LOL! Only I think the difference is that I am TWO polar bears. I am having trouble getting started on exercise. I have an excuse every day, so if you need any, just email me. lol! I am trying to eat healthier (and LESS). :) Baby steps is definitely a good idea. You have been through a lot, and I know it has been rough on you. Sometimes we can keep the lid on the boiling kettle for a long time, and then when the pressure is off, we deflate (talk about mixed metaphors). You know what I mean. Off to get more coffee! lol! xox Pam

I am in exactly the same space you are.... exactly!

I think all the worry for Nicole was exhausting ... give yourself a break..
Take yourself out for a pedicure... then come back and tackle a drawer.

I am often there,too- -knowing I have to moove, and not finding the energy, and joy to do that---
Have been like that all january..
now I startet ,too- every day (morning) taking a walk-only 30 minutes- maybe on the beach looking for driftwood--but I`m out,I`m walking ,I`m getting air-the house waits.........
Hugs,Dorthe

Oh, "Sister", have you echoed my January/February thoughts! I think I will follow your plan, too!

Hey Sue, I'm in a funk too. Not feeling too creative. It could be something of winter blues--the weather is definitely NOT helping. You look like you have the right attitude about it!

C'mon Sue..... do it with me...!! I'm getting back into my old exercise routine again too. Didn't do much right after my wrist surgery... then like a fool, walked on the treadmill in my slippers because I couldn't tie my runners...and totally wrecked my right foot! Arrrghh... and then.... bent over to take some leaves out of the downspout one day and yikes! felt like I'd been stabbed in the ribs with a hot poker. Didn't bother going to the doctor... what difference would it really make ?.. Broken ribs or torn tissue... still just have to wait it out and the...start moving easily at first.... which I did.

So...now....I'm back to 40 minutes on the treadmill (in my reeeelly comfy good quality shoes!) and also doing my stretching and other stuff...like leg lifts and crunches... some small weights etc....

Sue, You have been through so much, With Nicoles illness and all. I think it would zap all your energy. It may take some time to get back to normal but I know you can do it. baby steps then leaps and bounds.
Hugs Lynn